This might be a strike of luck or the outcome of a long steady strive for perfection, either ways Coleman has now taken over the scene of inflatable kayaks and for all the right reasons.

The inflatable market might not harbor as much competition as other sport toys industries but it is definitely growing fast. Coleman is as a prime example of a leading manufacturer because not only did it revolutionize the notion of kayaking but it has also put this industry on the map.

Kayaking has always been a fascinating sport but also a slightly complex one. As a beginner I truly struggled to identify the variety of kayaks out there, make up my mind on which hull type I needed, which paddle, which type of cockpit and most importantly, how can I cater for something this big on a regular basis. I really can’t say that I regret discovering this sport in that particular way but I still wish I had known that inflatable kayaks existed back then. 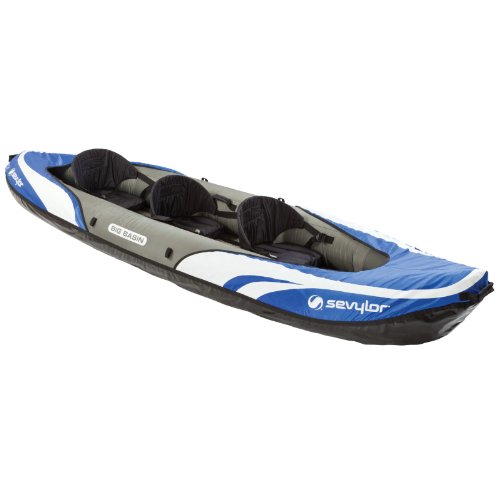 The thing about inflatable kayaks in general and Coleman kayaks specifically is that they are extremely practical and surprisingly rigid. A lot of people tend to think that because it’s an inflatable, it’s going to be rather fragile and easily damageable but truth is they are far more advanced than the standard solid kayak.

If that’s still hard to believe then let’s take a look at the Coleman Big Basin and figure out if it’s the right inflatable kayak for you. The Coleman Big Basin is the latest addition to a long line of successful models which are mainly prized for their quality.

There are two very important things you need to pay attention to while looking for any product and those are quality of material and quality of build. Fortunately, the Coleman Big Basin seems to strike a perfect balance between the two and that’s significant.

When it comes to its core materials, the Coleman Big Basin is strictly made of heavy-duty PVC which is virtually indestructible. That is to say that you won’t need worry about where you kayak or how wild you can go because this kayak can take a beating.

Not only that but Coleman paid extra attention to the most vital part of the kayak. To make the bottom even more rigid, Coleman covered it with tough tarpaulin which is stronger, safer and more resistant than you can imagine. That being said, you can’t really argue against the fact that the Big Basin is definitely a top notch multi-person inflatable kayak. First things first, let’s take out the rulers. No not that kind of ruler. The Coleman Big Basin is huge as it measures 12 feet 3” in length and 3 feet 1” in width and that’s for a very simple reason. This is a family / company kayak.

This inflatable kayak is more of a zodiac as it can cater for a whole family. With three adjustable seats, there’s no way you can get overwhelmed with quantity but don’t worry, you can also remove the seats when you need more space for yourself.

Moreover, the cockpit is definitely an asset for this Coleman as it is less constraining than usual, making it easier for riders to get inside and outside of the kayak at ease. At the same time, the spray skirts on the front and back enable you to keep your cargo dry at all times.

On that note, I would like to stress the fact that this is a great inflatable kayak but it’s not fit for white water cruising. Not only is it unsafe for beginners but white water kayaking requires a set of skills, equipment and a little bit of bravery. So stay on flat water and evolve gradually.

Not that the Coleman is easily punctured but even if a sword fish cuts through your kayak and punctures it, it’d still float thanks to its “multiple air chambers” design. That’s genuinely one of the best features about this boat because separating chambers makes it a lot safer for you and a lot easier to fix.

From specific to general, the overall design of the Coleman Big Basin is surprisingly appealing and I say surprisingly because, believe me, not all inflatable kayaks look good. Seriously, however, it is definitely delightful to look at this kayak on display but even more on the water.

[alert-note]Side note: A whole lot of its charm is attributed to the color matching and smart labeling which give this kayak a simplistic yet fancy look.[/alert-note] 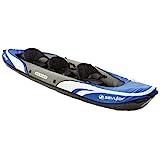 When it comes to performance, I can’t tell you that the Big Basin is good because it’s actually better than just good. As tough as it is to beat a tough kayak at performance, this boat comes actually pretty close to that.

There isn’t much to say on the inflatable VS. solid conflict besides the fact that inflatables are perfect for entry level and intermediate riders while solid kayaks are more likely to appeal to professionals.

The fact that the Coleman Big Basin is inflatable makes it so much more accessible for most people who would like to try kayaking occasionally and that can be summarized in two particularities.

The only thing lacking in most inflatable kayaks is the ability to track in a straight line effortlessly which is common amongst recreational kayaks in general. The thing about these kayaks is that they mainly come in flat bottom hulls which are very flexible and relatively easy to manoeuvre but they’re also hard to keep at a straight line when going slow.

That being said, the Big Basin is still a solid performer and you can only see that once you get it on water. So, make sure to give it a try.