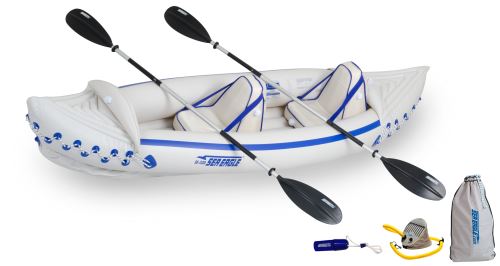 You see, when it comes to inflatable kayaks, you’re either a Sevylor or a Sea Eagle boat enthusiast which is the equivalent of Batman Vs Superman. So which brand of inflatable boats will you go for?

Sea eagle 330 is known for being one of the leading if not, the pioneering manufacturer in the industry of inflatable sports equipment specifically prevailing at making all kinds of kayaks.

The company did not just appear out of nowhere and just started making kayaks, and they have been developing and engineering some of the best inflatable kayaks in the market.

So far, the Sea Eagle has created a number of inflatable kayak models on the market which have quickly attracted the attention of most people interested in getting their first kayaking experience. Not all these models were equally successful though, but you could safely say that the majority of them have received positive reviews.

Quality is a big concern with inflatable kayaks and with most inflatable sports equipment. It’s not rocket science really, you see an inflatable sea kayak and the first question that comes to your mind is “how tough can that be?”

The ruggedness and durability will depend on the manufacturer or the brand, the materials used, and how the sit-on-top kayaks were constructed.

Inflatable kayaks aren’t at all as vulnerable to punctures or damage as you might think and the best example of that is the Sea Eagle 330. This boat is extremely rigid as it is strictly made of industrial PVC material, making it virtually indestructible. What that means is that you don’t have to worry about where or when you kayak because there’s nothing that can damage this boat terminally in its designated environment.

The manufacturer also thought that since the Sea Eagle 330 kayak bottom is susceptible to stress, it was reinforced with a 33mm polykrylar I-beam constructed shield that makes this boat sun and saltwater resistant. Also, the multiple air chambers make it less likely to sink the Sea Eagle Inflatable 330 kayak when punctured.

Whereas, on the other hand, the multiple air chambers make it less likely to sink the 330 when punctured.

If that’s not enough for you, then these features are enough to consider how this kayak compares to a solid, traditional two-person kayak. Not only is the Sea Eagle 330 extremely reliable on the water, it’s also very practical as well. Consider the fact that when you choose to go with an inflatable kayak, you immediately strip two major kayaking constraints that face everybody out there who would like to try out this sport: storage and transportation.

While you probably need a car and a large garage to cater for a solid kayak, all you need for an inflatable boat a bag/backpack and a foot pump. Thus, all you’ll need to do is deflate the kayak, roll it up, shove it inside a bag and you’re ready to go and that’ll come in even more handy when you’ll need to travel with the sports kayak.

Even the most insignificant features of the Sea Eagle 330 exhibit a high level of dedication which is a solid indicator that the Sea Eagle inflatable kayak will exceed your expectations. The adjustable inflatable seats provide exceptional comfort and good looks when you paddle.

User friendliness and variety of options are other essential reasons putting inflatable boats ahead and the Sea Eagle kayak 330 is a great example of that. So, forget about your legroom woes when you can actually adjust your kayak seats to ensure that you’re sitting comfortably and your legs aren’t crammed against the front of the boat.

Also, keep in mind that the Sea Eagle 330 is a company/family kayak which is the main reason why this boat is large. This boat measures 134 inches (11.16 feet) long and  34 inches (2.83 feet) wide; try to wrap your head around that. Nevertheless, this boat can shrink to fit in a backpack when deflated, so don’t worry. Also, the weight capacity of this boat can reach up to 500 pounds, so make sure to invite all your friends along.

The bow and stern grab line are definitely one of the features that should not be taken for granted lightly as it is the only thing that can safely secure or tow your kayak when needed and believe me, you will need that.

The cockpit on this kayak is definitely another feature that deserves a mention because it’s a lot better than you’d expect. The best thing about this cockpit is designed to make it easier for you to enter or exit it and that’s something you’ll learn to appreciate in time.

Additionally, the boat is equipped with inflatable water spray skirts that are located on the front and rear of the kayak and serve the purpose of keeping your cargo dry. This feature isn’t only good for keeping your stuff dry but it’s also great for securing anything precious on board.

When it comes to performance, I’m going to give it to you straight, this board is not that good at sailing the waters, it’s actually great!

The Sea Eagle 330 might not compete with higher grade solid kayaks but for a recreational one, it’s actually fantastic.

because this is reinforced to the hull of the boat. As mentioned earlier, the kayak has a flat bottom which is typical for recreational and entry level kayaks. This type of hulls makes controlling the boat far less complicated. However, although the  Sea Eagle 330 features two skegs on the bottom of the boat, tracking is still somehow lacking.

All in all, this boat will prove to be more than satisfactory for all entry-level and intermediate kayakers out there. But if you’re looking for something more professional, then you might want to consider another inflatable canoe to paddle.

​The best thing about this kayak, in my opinion, is the fact that it comes in three different packages that cater to different needs

​All models come with built-in drain valves or one-way valves to drain out collected water inside the boat.

Storage will be one of your primary concerns if you’re into an outdoor hobby like kayaking. Traditional kayaks or canoes need ample room or at least a rack for you to store them.  If you want to take them to a local lake, river or beach, you will also need the right vehicle to carry it around.

Having an inflatable kayak like the Sea Eagle 330 pretty much solves both of those storage issues. Once correctly deflated and folded,  it fits easily into the trunk the back seat of your car or in a backpack. It might be heavy carrying everything in the bag in certain distances, especially if you need to go up hills, but this kayak is much easier than a regular kayak. Overall, this kayak is a good buy, and it provides the average kayaker everything they need with its space-saving benefits and super durable materials. 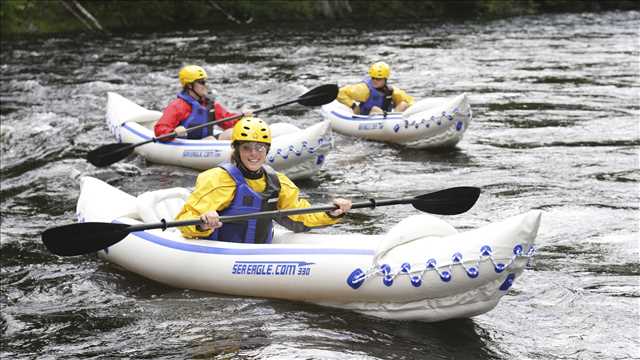 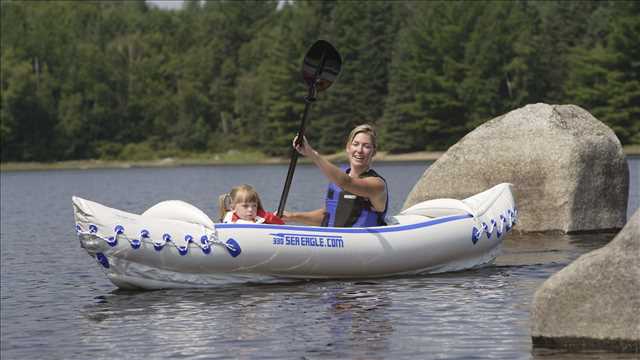 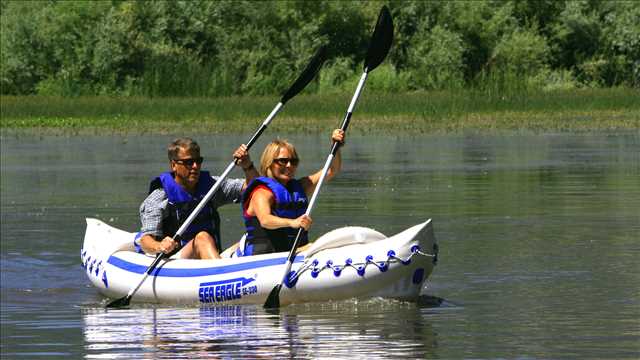 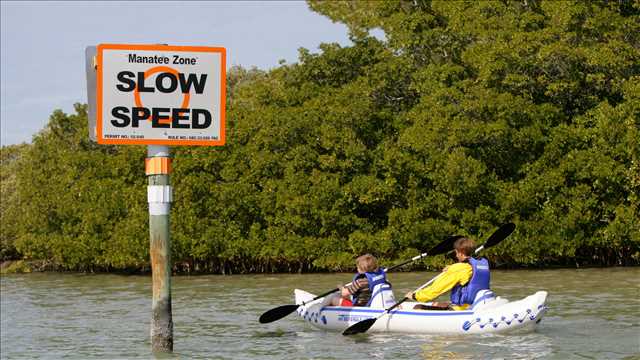 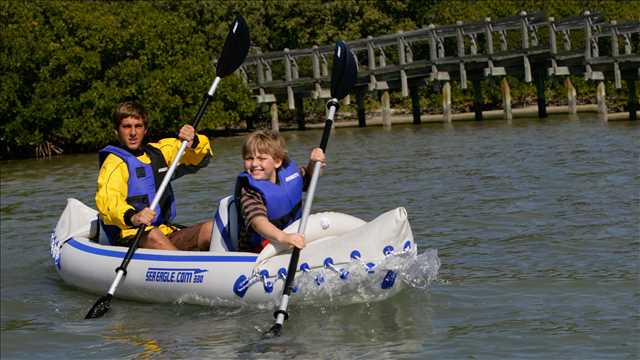 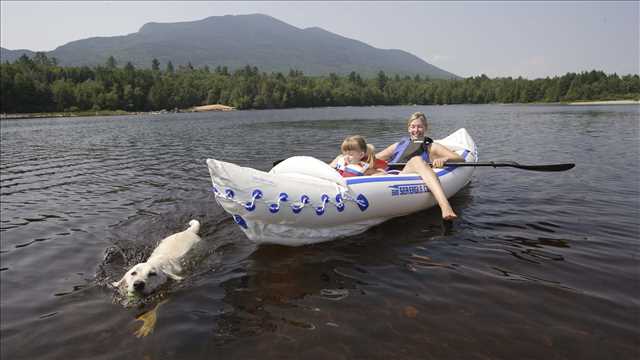 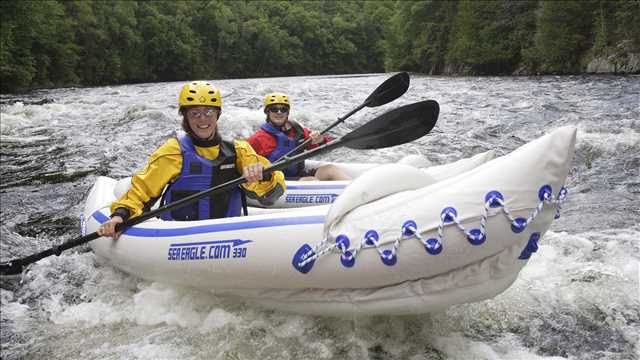 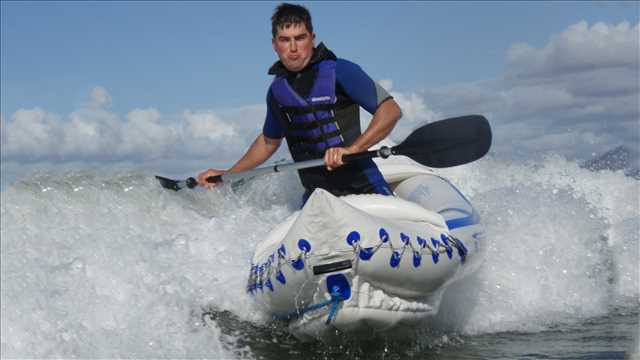