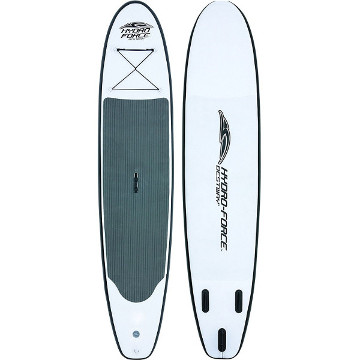 Today’s review is going to be about the Bestway Hydro-Force Wave Edge which is one if the cheapest inflatable paddle board on the market. This iSUP might not be famous but it is sure to impress you on real ground. 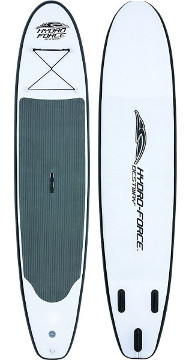 As mentioned before, the Bestway Hydro-Force Wave Edge is constructed to meet the need of mostly beginners that’s why you’ll find that it is only 10 feet and 2 inches long. I’m not trying to make it seem small because a 10 feet board can also be perfect for intermediate paddlers.

The Thing is that if you are looking for adventure and speed you’ll probably need a bigger board. Anyhow, the Bestway Hydro-Force Wave Edge will serve you just right in terms of width; it’s 27 inches wide which is a bit narrow than most inflatable all-round recreational paddle boards out there. Also, this board is just 4 inches thick which could have been better. Thin inflatable paddle boards are known for being prone to flexing at the center under heavy weight.

Bestway seems to understand how the iSUPs’ industry works; the Hydro-Force Wave Edge is made of quality drop-stitch material that allows the board to expand under a high level of air pressure without losing shape or going loose.

The Thing is that if you are looking for adventure and speed you’ll probably need a bigger board. Anyhow, the Bestway Hydro-Force Wave Edge will serve you just right in terms of width; it’s 27 inches wide which is almost the standard for all-round recreational paddle boards. Also, this board is just 4 inches thick which could have been better. Thin inflatable paddle boards are known for being prone to flexing at the center under heavy weight.

Every inflatable stand up paddle board has something special to it and what I found special about the Hydro-Force Wave Edge is its sleek and basic design. This board is built with an all-round shape that is perfect four touring, and I’m not going to lie to you; it was a blast to ride this one. Now, let’s shed some light on its major features:

Like always, a good package is a good deal. The Bestway Hydro-Force Wave Edge is a great deal for anyone who is looking for a cheap inflatable paddle board. This board comes in a complete package, you’ll find :

The Bestway Hydro-Force Wave Edge is a decent inflatable paddle board. It performs relatively well on various water conditions. Personally, I didn’t face any major problem controlling the board, on contrary; changing directions is the easiest thing with this board. Further, its navigation system allows it to track nicely and smoothly.

When it comes to stability; I was very pleased with how easy it is to balance my body on top of the board despite its narrow width. However, as a beginner, you’ll feel so much at ease on top of this board.

All in all, everything on this board is on point making it a great deal for the buck.

We use cookies on our website to give you the most relevant experience by remembering your preferences and repeat visits. By clicking “Accept”, you consent to the use of ALL the cookies.
Cookie settingsACCEPT
Manage consent

This website uses cookies to improve your experience while you navigate through the website. Out of these, the cookies that are categorized as necessary are stored on your browser as they are essential for the working of basic functionalities of the website. We also use third-party cookies that help us analyze and understand how you use this website. These cookies will be stored in your browser only with your consent. You also have the option to opt-out of these cookies. But opting out of some of these cookies may affect your browsing experience.
Necessary Always Enabled
Necessary cookies are absolutely essential for the website to function properly. This category only includes cookies that ensures basic functionalities and security features of the website. These cookies do not store any personal information.
Non-necessary
Any cookies that may not be particularly necessary for the website to function and is used specifically to collect user personal data via analytics, ads, other embedded contents are termed as non-necessary cookies. It is mandatory to procure user consent prior to running these cookies on your website.
SAVE & ACCEPT