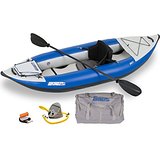 As far as inflatable kayaks are concerned, there isn’t much of a debate on which brands to trust and which to be more skeptical about.

Sea Eagle for instance is one of the most highly ranked manufacturers in the industry. This brand is considered to be a leader and for all the right reasons too.

In almost no time, Sea Eagle has managed to dominate the majority of categories in this domain one 5 stars review at a time. That’s not to say that whatever this brand makes is the best but anything this brand makes is still far better when compared to most manufactures in the industry and there is no secret to as why is it doing so well.

Let’s be more specific and narrow our scope down to the Sea Eagle 300x Explorer. This right here is Sea Eagle’s latest additions to a long prosperous line of recreational kayaks and it is undeniably an impactful product. 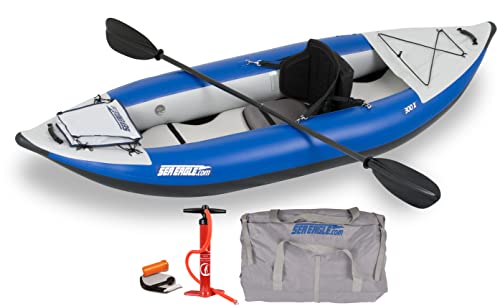 Quality is one of the most prominent variants that make of this kayak an exemplary one.

When it comes to quality, there are typically two axes that you want to analyse in any product and those are quality of raw materials and quality of build.

Luckily, as far as materials are concerned, the Sea Eagle 300X Explorer is strictly made of a reinforced 1000 denier which is the fabric of choice for manufacturers of high performance gear and apparel. If you’re not sure what that means, then think of a genetically modified alligator. Not exactly exaggerating here, but in other words, this kayak is built to last for a long long time.

As if that is not powerful enough, Sea Eagle thought it would be a good idea to invest in electronically welded seams, making this kayak virtually indestructible. In fact, the brand trusts this product so much that they’re willing to rate it a class IV white water suitable vessel.

Technically, this means you get to actually enjoy your kayaking experience regardless of how wild you need to be instead of treating this boat like a baby and that is something exceptional, especially for an inflatable kayak.

In brief, the Sea Eagle 300X Explorer is more or less a super inflatable kayak and taking into consideration this information; that is by no means an overstatement.

Even the most basic features make this kayak a strong contender in its category and that is one more reason to seriously consider making this purchase.

Generally, the Sea Eagle 300X Explorer is designed with the purpose to rightly accommodate for one passenger. However, those guidelines are not written in stone as this kayak is spacious enough to cater for an adult + a pet or a child.

That being said, it must be noted that the 300X Explorer comes with a lonely seat but there’s a lot more to it than just that. Sea Eagle made sure to provide this model with one of the most stable and comfortable seats in the industry. Not only that but this seat is equipped with a back pocket and most importantly, it is removable. (This option will enable the kayak to host 2 young adults at most)

Typically, the cockpit receives most of the manufacturer’s and buyer’s interest which is fairly justifiable as it could easily be a deal breaker. Fortunately or unfortunately for you, the Sea Eagle features an open cockpit which grants your more space to do more but that also means that the spray skirts are limited to the front and rear edges of the kayak.

Compared to constraining cockpit designs, this right here is considered to be an upgrade especially for beginners as it is meant to make it easier for you to access and leave the kayak. Also, an open cockpit grants you more leg and cargo room which is a nice touch. Another defining feature of the Sea Eagle 300X Explorer is the fact that it has multiple air chambers, making it impossible to sink this kayak in case it is punctured. The floor of the boat however is made to be a lot stronger for obvious reasons and that will make it even less likely to damage in its designated environment.

Other useful features of the Sea Eagle 300X Explorer are the bungee lacing on the front and rear spray skirts which are great for securing smaller cargo, the carry handles on the front and rear that are meant to make it easier to carry and transport the kayak and the rear skeg which enhances performance noticeably.

When it comes to performance, you can easily classify this kayak as a solid pick and that’s while taking into consideration the fact that this is primarily a recreational kayak.

For a kayak that measures 9 feet 10 in length by 3 feet 3 in width, the Explorer is not really a small vessel. However, that doesn’t take away from the fact that it navigates wonderfully.

The rear skeg makes it a lot more manageable to control this kayak but even more importantly, it grants you more stability to keep it in a straight line even at higher speeds.

Also, the 300X Explorer features a flat bottom hull  as it is the case with most recreational kayaks and that makes this kayak a lot more agile and beginner friendly but it does fringe a little on straight tracking. However, wiggling a little should be the least of your concerns as it will easily vanish as you pick up speed.

Overall, the Sea Eagle 300X Explorer is a bar raiser and that makes it a really interesting kayak. However, what makes it even more interesting is that it is an inflatable one.

Another great feature of the Explorer is that it comes in different packages that are meant to satisfy different tastes.