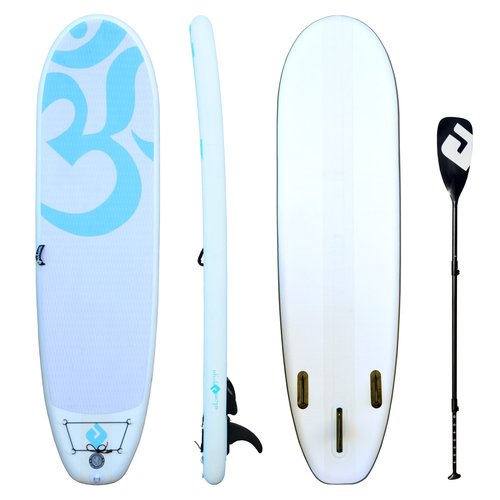 Yoga enthusiasts are getting so much attention from whole lot different industrial domains including The thing about yoga inflatable paddle board.

Yoga has proven to be a great recreation and relaxation activity for different people with different needs; that’s why Atom Surf decided to put stand up paddle boarding and yoga together for people like you, who are willing to take yoga right into the water.

This review is going to be about the Atom Surf Yoga inflatable paddle board which is considered to be a great yoga choice for different riders who are into water yoga, and that’s without compromising good-built and quality. Keep reading to see more of the Atom Yoga’s details and features. The Atom Surf presents their yoga inflatable paddle board in two different colours; blue and green. However, both the boards have the same dimensions and qualities.

The thing about yoga inflatable paddle board is that they are meant to excel when it comes to stability, that’s why the Atom is 33 inches wide which is the best on the market. Most inflatable boards are usually 30 inches wide; thus, 3 extra inches is totally going to make a change. This aspect is what’s extremely vital when it comes to yoga boards; the wider the board, the more stable it’ll be on water, and that’s pretty much what everyone is looking for in an iSUP.

Concerning length, the Atom is 10 feet long which is only reasonable for a yoga paddle board, because as far as I’m concerned, there isn’t someone who would find or think that these 10 feet are not enough for yoga routines. Actually, this length measurement is quite the standard for The thing about yoga inflatable paddle board.

Last but not least, the Atom is 6 inches thick which is pretty expected. It’s very rare to find a yoga board which thickness is less than 6 inches. That being stated; you must know that by ordering this iSUP, you’ll be getting a board with the best aspects given to any inflatable stand up paddle board.

All in all, I could confidently say that the Atom has the perfect dimensions for a recreational yoga paddle board, as I can also argue that the Atom Yoga is not only good for yoga, but also touring if you consider it to an all-round iSUP. It’s a known fact that inflatable stand up paddle boards are not fragile anymore; they are proven to be thick, stiff and durable. The Atom Surf is all about making hard and affordable boards, and the Atom Yoga is their living example to manifest that; it’s made of military-grade PVC material which is the only thing that makes me feel secure when talking about an iSUP’s construction.

There is also this PVC rocker belt that holds the parts of the board all together tightly allowing you to inflate it up to 15 PSI; it’s considered to be the air pressure level where any iSUP turns from soft to rock.

Further, the drop-stitch construction that is part of every quality iSUP is the one thing saying that this iSUP is made to be preserved, that this iSUP will not be easily destroyed, and that it’ll maintain its shape and performance for years to come.

The Atom chose to go with what’s basic for their yoga boards; the Atom Yoga is quite a simple iSUP with simple counted features to maximise space, safety, and comfort when it comes to yoga routines. I’m a package person to be honest; if the package is complete and all-inclusive with a good price and without compromised quality, then it’s definitely worth going for. If not, I might absolutely have second thoughts about the whole thing.

Good thing the Atom Yoga is one of these all-inclusive packages that I appreciate quite a lot. Once you order this iSUP, you’re expected to find the following:

This part is the one that always reminds me of why I went for an inflatable paddle board in the first place; with a package like this, you can always be on the go with your board on your back or in the back of your car without compromising neither, fun, nor performance.

The Atom Yoga is made to maintain a great balance that you probably wouldn’t experience on other iSUPs. It can also be dealt with as an all-round iSUP which should be great for touring discovery.

However, the Atom Yoga can’t be thought of as a fast board and that’s pretty obvious. Yet, I must give it the following; it’s responsive, easily directed, and it’s nearly impossible to bend or cause it to submerge under water thanks to its width and thickness.