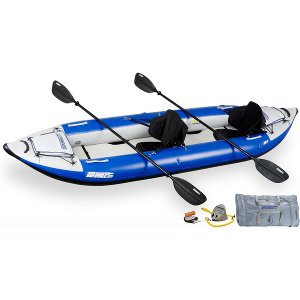 If inflatable kayaks had a god father it would be the Sea Eagle because it has been around for ages.

Sea Eagle is considered to be a legend in the inflatable kayak universe and that comes with a heavy price. For years, this company has strived for glory and after collecting an endless set of positive reviews, you can argue that it has reached the peak.

Overwhelming the market with as much as 10 various models a year, you can tell that Sea Eagle is very serious about what they’re doing but most importantly, you can also tell that their prime focus is the buyer’s preference which seems to be lacking in most companies out there.

Only recently has this brand launched their newer and better kayak under the name of Sea Eagle 380X. This brand new addition to a long prosperous line is already taking over the reputation its predecessors worked hard to establish and it seems that it’s all because of the quality of this kayak.

The questions that come to mind right now are: how is this kayak an improvement from its older siblings and what makes it a safe bet? Well, there’s a brief answer to that and a long detailed one but just because there’s a lot of cash on stake here, we’ll take the detailed approach.

When it comes to quality, the Sea Eagle 380X is undeniably a beast. Accordingly, there are two main aspects to examine before you can make that judgement and those are the quality of build and that of material.

Unsurprisingly and like most Sea Eagles, the 380X is based off a hardcore 1000 denier, supported polyester, and high resistance fabric which is often found to be the base material for army bullet proof vests. What that means is that the Sea Eagle 380X is basically virtually indestructible which cannot be said about most inflatable kayaks out there.

In concrete terms, this Sea Eagle inflatable kayak is resilient enough to take on rocky rivers and mild white water as long as you can navigate properly. Better even, this is the kind of kayak that would last for a life time.

As for quality of build, I believe that nothing says rigid like a quadruple thickness fabric with electronically welded seams. If you’re wondering how tough that is then think of it this way: In torture testing -this is what the testing is actually called- This Sea Eagle was pounded repeatedly with a claw of a claw hammer and left no handicapping damage. If that doesn’t impress you then I don’t know what would.

As if that’s not enough, Sea Eagle has invested even more power into the floor of this vessel to minimize the possibility of damaging it to below 0. A double coated floor with a solid foundation is technically everything you’ll need to enjoy your experience without a single worry.

When it comes to features, I think you can safely assume that this product has it all.

Indeed, the 380X is considered to be one of the most user friendly kayaks in the industry and that is due to an abundance of up to date practical features.

Beside the crocodile skin, this kayak harbors quite a lot of features that every beginning kayaker needs. Namely, the wide open cockpit is one of the most appropriate features on this kayak as it is designed with the purpose to make it easier for you to enter and exit the vessel whenever needed.

The large cockpit isn’t only enhanced for accessibility but also to grant you more freedom to move around inside the kayak and adjust yourself comfortably within.

Another important feature of the 380X is the extremely flexible seats which are surprisingly more stable and comfortable than they seem to be. Also, the seats can be moved and removed in a few seconds which will prove efficiency once you need to adjust the kayak for one or multiple users at a time.

The fortified nose and tail of the kayak are also hooked with inflatable spray skirts which are meant to keep you and your cargo as dry as possible. This space can be used to transport snacks, fishing bait or even cargo you find in the water.

[alert-note](Note: Both spray skirts are equipped with bungee secured bags which are specifically there for more fragile cargo that must remain dry by all means.[/alert-note]

Last but least, the 380X features two carry-handles on the tail and nose of the kayak to make it more feasible to carry the kayak into and outside the water.

When it comes to performance, the Sea Eagle 380X is an approved water creature.

For a kayak that measures 12 feet 6 inches in length and 39 inches in width, this is actually a solid performer.

Like most recreational kayaks, this Sea Eagle comes with a flat bottom hull which is sensational for navigation and controls but can fringe a little bit on tracking.

Hence, the 380X was hooked with an improved tracking system to bridge that gap and make this kayak an ultimate one. The bottom of this boat is hooked with a large rear skeg which enhances straight tracking and makes it possible for you to actually enjoy your ride in strong currents.

All in all, you can think of the Sea Eagle 380X as an agile water creature with the tracking system of a zodiac. It just doesn’t get better than that.